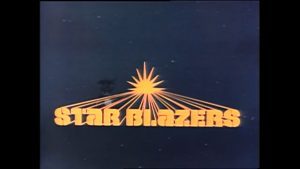 As a four year-old in the 1970’s, the joys of UHF channels were numerous. They were the old school equivalent of YouTube, showing a variety of things that regular network channels simply couldn’t or wouldn’t broadcast. Their boilerplate schedule typically included old sitcom re-reruns and movies the networks couldn’t be bothered to find ad revenue for. But every now and then, in the eyes of a kid, something truly unique would appear. School mornings, in particular, were notable.

I still remember one particular morning. It was so early the sun hadn’t decided whether to rise or not. Our house was not well lit even though the lights in the adjoining kitchen were on. The room was fairly dark, almost like a movie theater. My mother, an introverted hippy married to an extroverted salesman, was in the middle of getting me ready for another day of kindergarten. My sister, a mere two years younger, was throwing a hissy fit.

I never liked it when my parents were upset, and my high performance sis, bless her heart, had a special ability to fluster my mom at the drop of a hat. Before you could say ‘I’ll give you something to really cry about’, the tv flew on. My mom wrenched the UHF knob through over a dozen channels in a half second twist. Ah, a cartoon set in space. The zipcord-like sound of the channel knob stopped and she ran off to tend to my screaming sibling.

All of this focused my fragile little brain on the tv like a moth to the flame. The show, Starblazers, started with a marshal march, a catchy chorus, and a spaceship’s engine glowing in the eerie dark of space merged with the pitch black of our house. And with guns! Oh ho, the mom-lady wouldn’t like this! You couldn’t pry me away with a crowbar. I still remember the theme song over thirty plus years later: 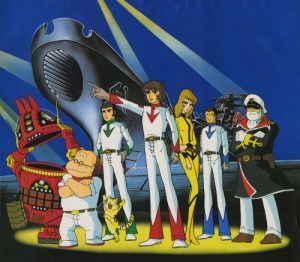 We’re off to outer space, we’re leaving Mother Earth
To save the human race. Our Star Blazers!
Searching for a distant star, heading off to Iscandar.
Leaving all we love behind, who knows what dangers we’ll find?
We must be strong and brave, our home we’ve got to save.
If we don’t, in just one year, Mother Earth will disappear
Fighting with the Gamalons, we won’t stop until we’ve won
Then we’ll return, and when we arrive,
The Earth will survive with our Star Blazers!

Derek Wildstar and Captain Avatar were going to Iscandar. They gave you the basic plot right there in the theme song. Within half a minute, I knew exactly what the show was about. Hot diggity, a cartoon kinda like Star Wars! I loved cartoons (still do) but Star Blazers was another beast entirely. This show had as much in common with Loonytunes as Gilligan’s Island to Ghandi (no offense to Bob Denver).

To start with, the tone was much darker than anything I’d ever seen. The evil Gamilons had devastated the Earth’s surface with atomic weapons, driving all of humanity underground. The radiation’s toxicity would reach Earth’s remaining population in one year. Queen Starsha from the planet Iscandar sends a message: she has technology that can cleanse Earth of all radiation. She also sends plans for something called the Wave Motion engine, a powerful weapon to be used against the Gamilons.

To survive, Earth sends their last starship, the Argo, on a mission to planet Iskandar to retrieve the technology that can save the planet. The journey wasn’t told in one-off, disposable, adventure-of-the-week episodes. It was a continuous storyline, and you had to watch each episode to keep up. The show’s characters often got hurt, seriously injured, or died from battle or sickness. Nothing else on my tv rivaled it.

I hadn’t actually seen Star Wars at this point; I was barely 4 years-old when the movie came out. I knew the plot, the characters, and the toys. But Star Blazers might as well have been Star Wars for all I cared. I had no idea what I was watching. But it had robots like R2-D2, starfighters like X-wings, and big ships like Star Destroyers, and the good guys had all three.

I had no idea I was watching what was called anime. I had no idea how much Star Blazers had been fundamentally altered from the original anime, Space Battleship Yamato. I also had no idea I was watching one of the most iconic cultural depictions of Japanese nationalism in anime since World War II (and completely re-written for a western audience to boot). All I knew was Star Blazers was cool even if no one else around me knew about it, and that was all that mattered. This was something special, and despite my tender age, I knew it in my bones. Little did I know how right I was.